Burlap Ironing Board Memo Board

Last night my mom and stepdad stopped over for a bit of supper.
The meal was a bribe.

After a couple of attempts to fix it,
the decision was made to call in my stepdad.

He can fix most anything.

In only about ten minutes,
much of that time even was devoted to fighting with an old water valve,
he had the leak fixed.

They had also brought some goodies for me -
SEVENTEEN burlap sacks!

I have plans for these.
Some little footstools are going to get reupholstered.

I also have some old grungy looking tabletop ironing boards ($1)
that I've been picking up at the thrift store.
Initially, I was hoping to make them into shelves,
but the plan had been changed to make them into memo boards.

The old covering was removed.
(and tossed, it was icky).
The burlap was folded around the board and stapled.

A tab was stapled to the back of the board,
so that it can easily be hung on the wall.

What do you think? 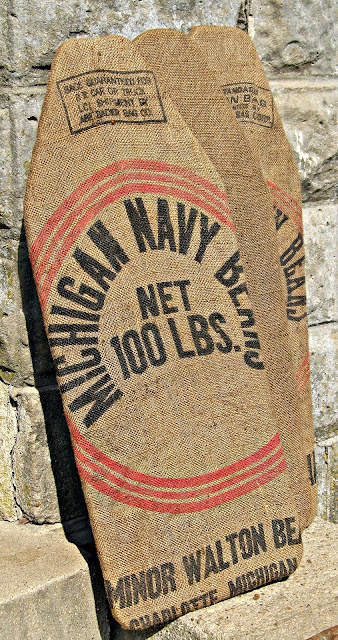 There are four of these boards in total,
but I ran about ten shy on my staples and have one more board to finish. 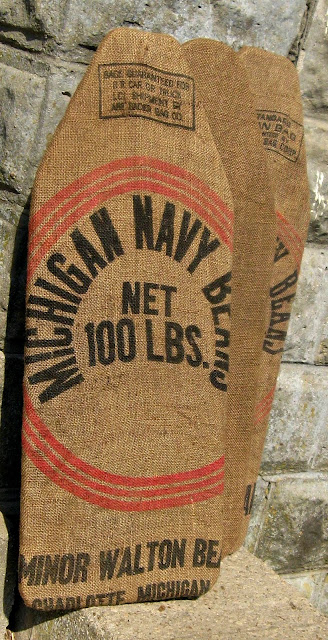 While picking up more staples, I'll be grabbing some thumbtacks.

With a little hot glue and some vintage buttons,
we'll have some unique pushpins to add to the memo boards.

The memo boards are heading to my booth at the antique mall.
Our annual Fall Color Drive is this weekend.

On 11-1, my first booth will be moving in next to my second booth.
This will be much more convenient.

An empty booth would also make the move so much easier.

Filling my booths and filling my shop are next week's projects.
Does your area have an annual fall event?

I've had a couple of emails inquiring about this project.
You don't have to have an ironing board on hand to make this.
You can make it out of any board, cardboard, foam, etc

that you think would be suitable for a memo board.
Simply cut the material you're working with into the desired shape.

Email ThisBlogThis!Share to TwitterShare to FacebookShare to Pinterest
Labels: My Booth, Projects

Thank you for visiting us at The Old Block House! I read every comment and love hearing from you. If you have a post or a party that you'd like me to visit, feel free to leave the addy in your comment below.

I love it when you pin my photos!

GFC is going away, please follow through Linky Followers found under header